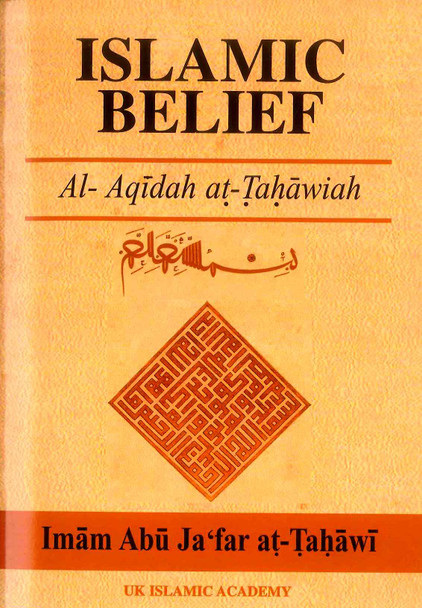 09A-Back
Islamic Belief "Imam Tahawi's al-Aqidah at-Tahawiah, representative of the viewpoint of ahl-al-Sunnah wal-Jamaah, has long been the most widely acclaimed, and indeed indispensable, reference-work on Muslim beliefs. Being a text on Islamic doctrines, this work draws heavily on arguments set forth in the Holy Qur'an and Sunnah. Likewise, the arguments advanced in refuting the views of sects that have deviated from the Sunnah are also taken from the Holy Qur'an and Sunnah. As regards the sects mentioned in this work, a study of Islamic history up to the time of Imam Tahawi would be helpful. Moreover, it contains references to views of the Shi'ah, Khawarij and such mystics that had departed from the right path. There is an explicit reference in the work to the non-sensical controversy on khalq-al-Qur'an in the times of Ma'mun and some other Abbasid Caliphs. While the permanent relevance of the statements of belief in al-Aqidah is obvious, the historical weight of these statements can only be properly appreciated if the work is used as a study text under the guidance of some learned person able to highlight its arguments fully. Such a study will help one understand Islamic doctrines better and avoid deviations."
View AllClose

MSRP:
Now: £7.50
Was:
Islamic Beliefs SL: 01DL1 At this time of confusion, heresy and division, it is essential for the Muslim to check on his belief and his approach to Islam, so that he may be certain that he is...
21194

MSRP:
Now: £12.50
Was:
Belief in ALLAH : Islamic Creed Series 1 SL: 01CL1 Although the vast majority of mankind believe in a Creator or Supreme Being, their concepts vary. Islam, in the Qur'an and Sunnah, affirms the...
22253

MSRP:
Now: £5.00
Was:
Islam Belief And Teachings 20B Now in its eighth edition, present islam as a complete way of life, expressing clearly and concisely the basic beliefs, duties and teachings of islam. it present...
22114

MSRP:
Now: £5.95
Was:
Muslims Beliefs, Customs & Traditions 09B Description from the publisher: In this short work of little more than 100 pages, the whole essence and spirit of Islam is detailed in a style so...
21369

MSRP:
Now: £13.95
Was:
The Islamic Awakening 07B The Muslim Nation today is experiencing a blessed awakening in all aspects of its affairs, one that has been aroused by the efforts of Muslims throughout the globe. This...
21218