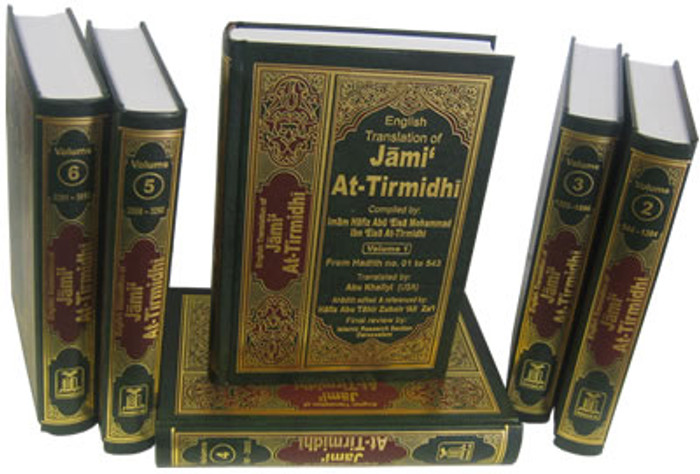 For the first time ever in English Translation, after years of painstaking efforts at Dar-us-Salam, Jami' At-Tirmidhi is now available complete in 6 volumes! Like the other translations of the six books of hadith, Dar-us-Salam, has taken great care in correct translation, simple and clear modern English language and high quality publishing. Jami At-Tirmidhi is one of the classical books of hadith that was compiled by 279AH when it's compiler and the great Muhadith, Muhammad ibn Isa ibn Surah At-Tirmidhi (209-279AH), passed away. He was a special student of the great scholar of hadith, Imam Bukhari. He, like other great muhaditheen of our salaf, traveled a lot and quoted from many shuyukh. With 3956 ahadith, Jami' At-Tirmidi is an invaluable addition to any person's library of hadith collection. Imam Abu Ismail `Abdullah bin Muhammad Al-Ansari in Harrah said about this book: `To me, his book is better than the book of Al-Bukhari and that of Muslim. Because only one who is an expert in knowledge can arrive at the benefit of the books of Al-Bukhari and Muslim, whereas in the case of the book of Abu `Eisa, every one of the people can reach its benefit." In Jami`Al-Usul, Ibn Al-Athir said: "(It) is the best of the books, having the most benefit, the best organization, with the least repetition. It contains what others do not contain; like mention of the different Madhhabs (views), angles of argument, and clarifying the circumstances of the Hadith being authentic, weak, Gharib (odd), as well as disparaging and endorsing remarks (regarding narrators)." This translation by Darussalam Publications has several additional advantages including: * A final verdict about the authenticity of every hadith (in parentheses at end of every hadith) by the committee of scholars at Dar-us-Salam. * Comments in English after many ahadith to explain unclear points and to further explain the hadith * Translation from old manuscripts of hadith to get the most authentic version * Revision by three different levels of scholars to get as close to the original meaning * Arabic and English side by side for easy access * As always on all Dar-us-Salam books, the paper quality, binding, design and the print are unmatched. Alhamdulillah From the Cover: English Translation of Jami' At-Tirmidhi -- Compiled by: Imam Hafiz Abu 'Eisa Muhammad ibn 'Eisa ibn At-Tirmidhi -- Translated by: Abu Khaliyl (USA) -- Ahadith edited and referenced by: Hafiz Abu Tahir Zubair 'Ali Za'i -- Final Review by: Islamic Research Section, Darussalam

MSRP:
Now: £15.00
Was:
Dont Be Sad : HardCover SL: 01CL2 At a time in which the Muslims are beset with trials from every periphery and within, comes this heartening book rooted in the commandments of ALLAH (SWT), the...
21127

MSRP:
Now: £15.00
Was:
Golden Stories of Accepted Prayers 24B Taken from the Publisher's note What are invocations? In a real sense these are requests which come from the bottom of our hearts to ALLAH Almighty...
22345

A Guide to Male Female Interaction in Islam

Medicine and Pharmacy in the Prophetic Traditions 2 volume Set

MSRP:
Now: £620.00
Was:
Authentic Islamic Ahadith Collection with Free Shipping in UK ,All 7 Titles below are including in this listing. Click any Name/link below to buy individually  More Hadith books availabl
22444