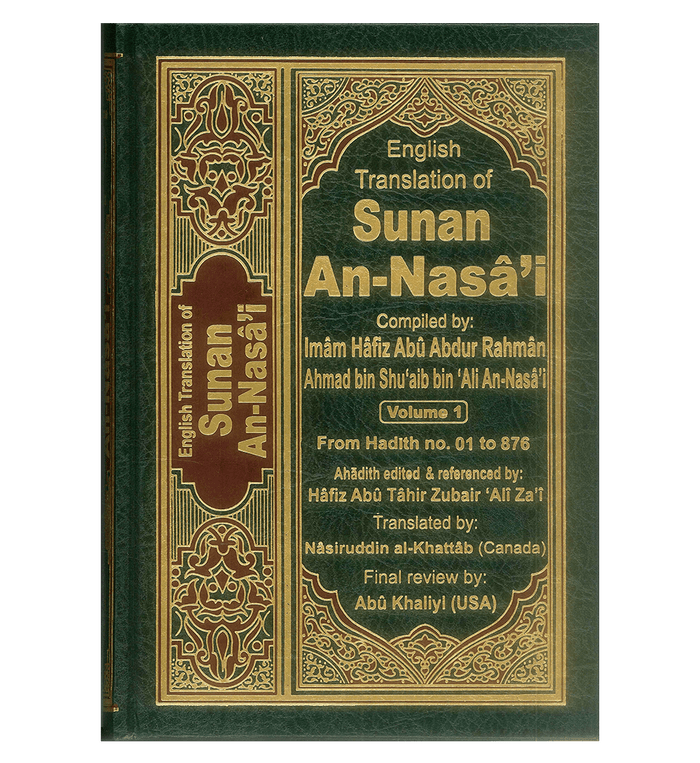 English Translation of Sunan An-Nasai 6 Volume Set By Nasiruddin Al-Khattab For the first time ever in English, after years of painstaking efforts at Dar-us-Salam, Sunan An-Nasa'iis now available, complete in 6 volumes! Like the other translations of the six books of hadith, Dar-us-Salam, has taken great care in correct translation, simple and clear modern English language and high quality publishing. Sunan An-Nasai has the fewest weak ahadith after the two Sahih collections. This Sunan is one of the six is al-Mujtaba or as-Sunan as-Sughara, which is a synopsis of a large collection of ahadith which he considered to be fairly reliable. In the smaller collection, only those ahadith which he considered to be reliable have been included. It was compiled by the great scholar of hadith, Abu Abdur-Rahman Ahmad bin Shu'aib bin Bahr An-Nasai (Nasa' of Khurasan) (214-303AH). Imam An-Nasai, like other great scholars of hadith traveled to Baghdad, Ash-Sham, Egypt, Mecca, and many other cities to seek knowledge. He received the praises of many scholars including Ad-Daraqutni who said about him: "He is given preference over all others who are mentioned with this knowledge from the people of his time". Some scholars consider his compilation to have the least number of defective or weak narrations among the four Sunan. This great book of his contains 5761 ahadith, making it as an invaluable addition to anyone's library. This translation by Dar-us-Salam Publications has several advantages including: A final verdict about the authenticity of every hadith (in parentheses at end of every hadith) by the committee of scholars at Dar-us-Salam Comments in English after many ahadith to explain unclear points and to further explain the hadith Translation from old manuscripts of hadith to get the most authentic version Revision by three different levels of scholars to get as close to the original meaning Arabic and English side by side for easy access As always on all Dar-us-Salam books, the paper quality, binding, design and the print are unmatched. Alhamdulillah From the Cover: English Translation of Sunan An-Nasa'i Compiled by: Imam Hafiz Abu Abdur-Rahman Ahmad bin Shu'aib bin Bahr An-Nasai Ahadith Edited and referenced by: Hafiz Abu Tahir Zubair Ali Zai Translated by: Nasiruddin al-Khattab (Canada) Final Review by: Abu Khaliyl (USA)

MSRP:
Now: £620.00
Was:
Authentic Islamic Ahadith Collection with Free Shipping in UK ,All 7 Titles below are including in this listing. Click any Name/link below to buy individually  More Hadith books available...
22444