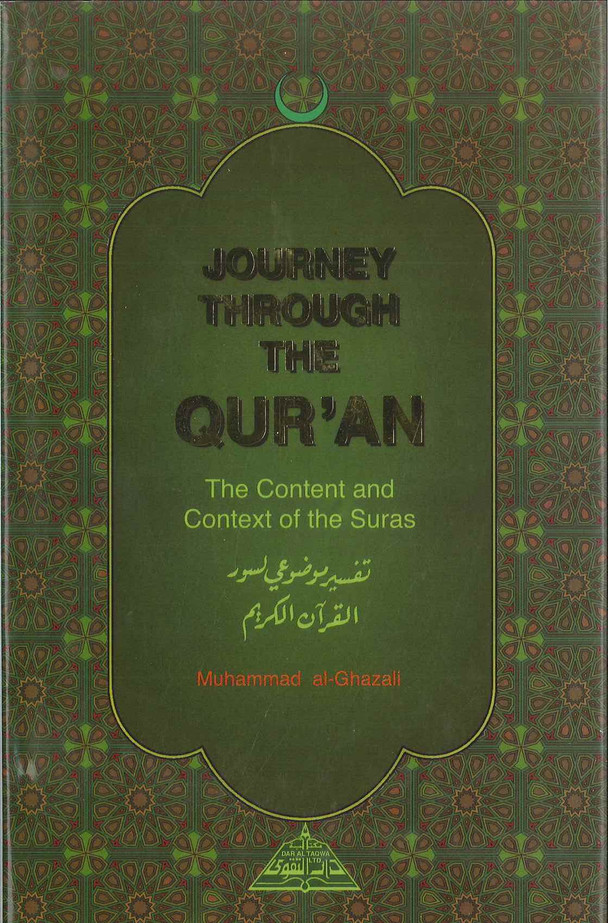 SL:013
"Journey through the Qur'an" is the last and perhaps the most important work of the Egyptian scholar Sheikh Muhammad al-Ghazali. Whereas previous commentaries have always concentrated on explaining individual words and verses of the Holy Book, Sheikh al-Ghazali examines and explores the general theme or themes of each Sura in turn, and shows how they are expounded in the text. Drawing upon his profound classical Islamic learning and an extensive knowledge of modern science, Sheikh al-Ghazali has broken new ground in Qur'anic studies, bringing to bear a fresh but wholly authentic approach. This is a work which all serious students should have, to complement the classical tafsirs and studies. Indeed, "Journey through the Qur'an" will prove useful to all, Muslims and non-Muslims alike, who desire to increase their knowledge and understanding of Allah's final Revelation to mankind. Sheikh Muhammad al-Ghazali was one of the most influential Islamic scholars of the twentieth century, both as an author and in the field of Da'wa. Born at Buhayra, Egypt in 1335/1917, he received his schooling at the Alexandria Religious Institute before entering the Faculty of Usul al-Din at the University of al-Azhar. In 1362/1943, al-Ghazali was appointed Imam and lecturer at al-Makataba al-Khadra in Cairo. He later became a prominent member of the Muslim Brotherhood and a close associate of Sheikh Hasan Al-Banna. During the early 1950s he worked for the Islamic Movement in various capacities. Subsequently his work for Islam extended over many parts of Africa, Asia, Europe and America as well as the Arab countries.
View AllClose

MSRP:
Now: $9.00
Was:
The Journey of the Strangers SL: 19B In this age of materialism, consumerism and extreme liberalism, the Muslim often finds himself at a loss, at odds to the ebb and flow of society, and holding...
21089

The Journey to Allah

MSRP:
Now: $7.50
Was:
The Journey to Allah 19B Bukhari records on the authority of Abu Hurayrah that the Prophet said, "Your actions alone will not save any of you." They asked, Messenger of Allah, not even you?, He...
21099

MSRP:
Now: $10.43
Was:
The Spiritual Journey To Allah & His Messenger Eemaan Made EASY Series (Part-5) by Muhammad al-Jibaly. Publisher: Al-Kitaab & as-Sunnah Publishing. 07B This is a simplified series of books...
21198

MSRP:
Now: $5.93
Was:
The Souls Journey after Death SL: 014 This book covers an area about which most people have very little knowledge but which is, at the same time, of vital interest to all human beings. It outlines...
21588

Journey Through The Quran: An Overview Of All 114 Chapters

MSRP:
Now: $5.93
Was:
The Souls Journey after Death SL: 014 This book covers an area about which most people have very little knowledge but which is, at the same time, of vital interest to all human beings. It outlines...
21588