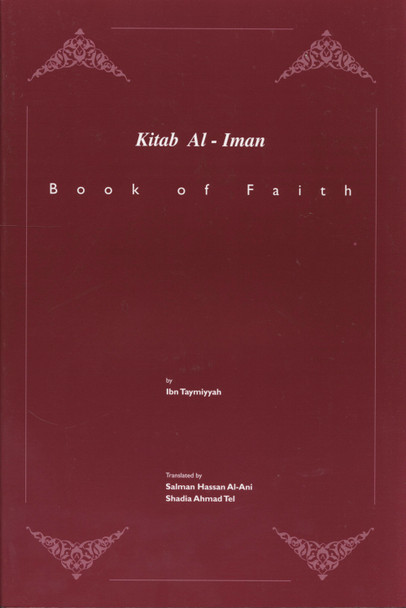 11A
The book of faith represent the first complete English translation of the important and well-known work Kitab Al-Iman . Written by the renowned thirteen - century Muslim scholar IBn Taymiyyah. The concept of Iman, Faith is Fundamental to Islam. Iman has served to define the nature of Muslim life and the essence of the religion as a whole. Ibn Taymiyyah,s own deep conviction and understanding of Iman is based on interpretations of the Quran, Hadith , Sayings and Deeds of the Prophet Muhammad , and the conduct of the pious ancestors of the first three Islamic centuries.
View AllClose

MSRP:
Now: $9.00
Was:
Taqwiyat ul Iman Strengthening of the Faith 24A In this book, Shah Ismail shaheed has gathered under different topics all the horrible blunders of faith and practices whcih are contrary to the...
22977

Kitab At Tauhid (The Book Of Monotheism)

MSRP:
Now: $12.00
Was:
KItab At Tauhid (The Book Of Monotheism) 24A Kitab At-Tauhid is one of the best books on the subject of Tawheed (Tauheed, Tawhid - Monotheism) and ranks high in authenticity. In this book all the...
22805

MSRP:
Now: $9.00
Was:
A Summary of Al Qawl Al Mufid (Explanation of kitab ut Tawhid) By: Al Allamah Ash Shaukh - Muhammad Ibn Salih Al Uthaymin. SL: 15B The Importance of the subject of tawhid (Monothesim) is made...
21885

The Ultimate Guide to Umrah

MSRP:
Now: $16.50
Was:
The Ultimate Guide to Umrah 23B / 25A Based on the famous book 'Getting the Best outof Hajj' With special chapters on Umrah in Ramadaan & Visiting Madinah After Hajj, a Muslim considers Umrah...
21684

MSRP:
Now: $30.00
Was:
MOCHA SLIP DRESS   A perfect necessity to wear beneath your abaya and kimonos to give you a more streamlined look as well as reduce any bulk. The silk textured fabric compliments any over...
22598

MSRP:
Now: $15.00
Was:
Al-Muneer المنير في احكام التجويد 17A Books that take into account the level of the student and that can provide the recitation and tajweed in a systematic way, which correlates with the issues,...
23243