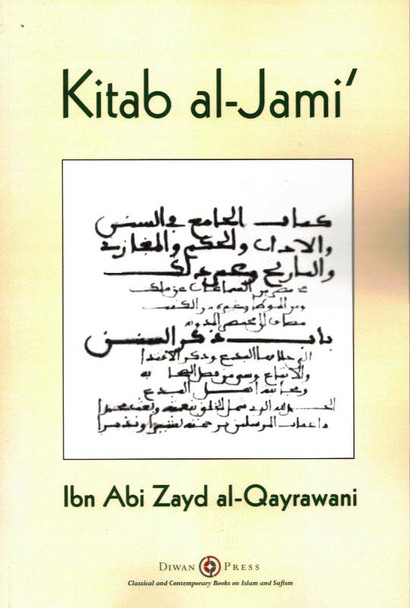 The Kitab al-Jami' is a comprehensive work on miscellaneous matters, particularly from the tradition of Madina as transmitted by Imam Malik. It was originally a part of the author's Mukhtasar abridgement of the Mudawwana, although it became a work in its own right and there is evidence that the author also regarded it as such. There is an extensive treatment of 'aqida, an examination of the contentious subject of bid'a - innovation in the deen, an exposition of the relative merits of hadiths and 'amal - the practice of the People of Madina- and an outline of the sira of the Prophet, as well as a large number of other matters. A great deal of the book is on the noble qualities of character as exemplified by men and women who held to them under extreme political pressure, in both wealth and poverty.

At 17 years of age, Ibn Abi Zayd al-Qayrawani (310/922-386/996) wrote his famous Risala in response to a request from a friend for a book with which to "teach children the deen just as they learn the Qur'an" and that work went on to become one of the key reference works for those concerned about the school of the People of Madinah. He lived in Qayrawan during the shi'a Fatimid dynasty.

MSRP:
Now: £35.00
Was:
Kitab Al-Iman (Book Of Faith) 11A The book of faith represent the first complete English translation of the important and well-known work Kitab Al-Iman . Written by the renowned thirteen - century...
21975

Kitab At Tabaqat Al Kabir (The companions of badr vol3)

MSRP:
Now: £15.00
Was:
Kitab At Tabaqat Al Kabir (The companions of badr vol3) 20B Kitab At-Tabaqat Al-Kabir by Abu ‘Abdullah Muhammad ibn Sa‘d is one of the most important and earliest surviving collections of...
22924

MSRP:
Now: £5.50
Was:
Sulayman ibn Qasim said, “The reward of every deed is known except for patience, for Allah Almighty Said: ‘Indeed, those who endure patiently will be given their reward in full...
25110

The Final Prophet Proof of the Prophethood of Muhammad ﷺ

MSRP:
Now: £10.00
Was:
Centuries ago the final revelation revealed upon PROPHET MUHAMMAD (PBUH). This message was sent all over the world , Today trillions of people believe and follow his message . In this book the...
25109

MSRP:
Now: £40.00
Was:
Al-Muwatta of Imam Malik ibn Anas Arabic and English (25107) The Muwatta' contains a record of the exemplification by the last Messenger of Allah of the message of the Qur'an, the practice ('amal)...
25107