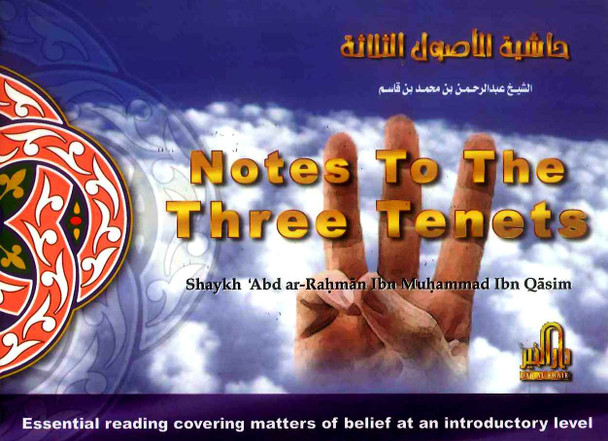 Islaam, the religion of truth and guidance, is built upon well-established and plain precepts. Accepted actions must rest upon a clear and sound belief and all the various matters and principles of belief trace back to three main tenets. These three tenets, which concern the Lord, the religion and the Prophet صلی الله علیه وآلهِ وسلم are also the subject of the question in the grave, thus it is extremely important for the Muslim to learn them correctly and apply their meanings throughout his or her life. “Notes to The Three Tenets”, by Shaikh Abdur-Rahman ibn Muhammad ibn Qaasim, is a straightforward and simple explanation and commentary to the famous synopsis of the Islamic doctrine known as al-Usool ath-Thalaathah (The Three Tenets), which was authored by Shaikh Muhammad ibn Sulaymaan at- Tameemee (D. 1206H / 1792). Dar al-Khair takes pleasure and seeks reward from ALLAH alone in publishing this work and hopes that it supplements and facilitates the Muslim’s quest for learning the basics of his or her religion, which is a matter deemed essential, of which none should neglect.
View AllClose

MSRP:
Now: £11.95
Was:
Notes on Al-Aqidah al Wasitiyah By Sh. Saleh al-Uthaymin 10B This is Shaykh al-‘Uthaymin’s abridged version of his lengthy work, Sharh al-‘Aqidah al-Wasitiyah, which is a formidable explanation...
21420

The Bounty and Favor in Concise Notes on Usool as-Sunnah

MSRP:
Now: £12.50
Was:
The Bounty and Favor in Concise Notes on Usool as-Sunnah The treatise is regarding the foundations of the correct creed, since Imaam Ahmad, may Allaah have mercy upon him, is the Imaam of the...
23611

MSRP:
Now: £5.00
Was:
The Three Abandoned Prayers 09A An explanation of three great blessed prayers, which have been abandoned by the Muslims, except for those whom Allah has shown mercy towards. As for the first,...
22615

MSRP:
Now: £5.00
Was:
The Three That follow To The Grave 19B In the Sahih of Al Bukhari and muslim ,it is reported that Anas ibn Malik narrated that the Prophet said: ”Three things follow the deseased person (to the...
23212

MSRP:
Now: £5.00
Was:
The Three Abandoned Prayers 09A An explanation of three great blessed prayers, which have been abandoned by the Muslims, except for those whom Allah has shown mercy towards. As for the first,...
22615

MSRP:
Now: £59.99
Was:
Kiitab can speak any word that you touch it with, allowing you to listen to Arabic words being pronounced perfectly at your convenience and without the need for a teacher...
24113

MSRP:
Now: £11.99
Was:
Juz Amma How to Get Your Child’s Quran Relationship off to Flying Start   Does your child struggle to progress in their Quran reading? Are they bored in their lessons? Are they...
24112