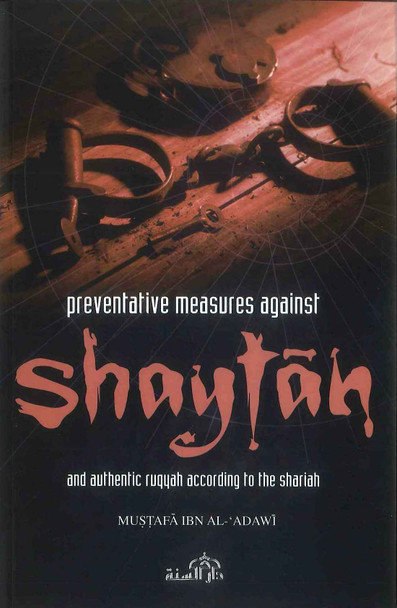 Indeed It is only Shaytan that suggests to you the fear of his helpers, so fear them not, but fear Me, if you are (true) believers. Surah Al-'Imran 3:175} When Shaytan inflicts a person with his touch it is blinding, and it obstructs the vision, but fear of Allah along with contemplation and submission to Him enables the heart to become connected with Allah. This state arouses the heart from neglecting His guidance so that those with taqwa remember, and when they make remembrance of Allah their vision is opened and covering is removed so that they become clear sighted.Allaah has not left mankind devoid of any equipment, for he has given them eeman that which is a shield, remembrance of him (dhikr) as preparation and the seeking of protection of him (al-isti' adhah) as a weapon. Allah has exposed the steps and methods taken by Shaytan, so that if a person neglects his shield and weapon and falls short in recognizing the plots and plans of his enemy, then his enemy will have power over him - and there is no ability or power except from Allah. If the servant of Allaah gives permission to his enemy, opens the door to his house for him, admits him therein and allows him to brandish the weapon on to fight with then he is alone to blame, and he should not blame anyone but himself. Truly it is by permission of Allah that a person once stated: 'Die in grief, for you have no excuse'.
View AllClose

MSRP:
Now: £17.50
Was:
Islamic Studies Grade 12 SL:04CL3 These textbooks (for the eleventh & twelfth grade levels) are part of the Islamic Education series which covers all areas of Islamic studies: tafseer,...
22340

MSRP:
Now: £5.00
Was:
Marriage and Divorce Keep Them In Kindness OR Release Them In Kindness SL:01AL2 At last, an English translation of a book on the topic of marriage & divorce, that is easy to read &...
22343

Supporting the Distressed Against the Tricks of Satan

MSRP:
Now: £7.95
Was:
Supporting the Distressed Against the Tricks of Satan 23A Imam Ibn Al-Qayyim said: The enemy of ALLAH, the devil, knew that the heart held the central position on which everything depended; so, he...
22552

Waswasah - The whispering Of Shaitan

MSRP:
Now: £3.95
Was:
Waswasah - The whispering Of Shaitan 16B Allah (swt) warned us that the Shaitan will try to mislead the children of Adam and that he will whisper to us to disobey Allah and worship others beside...
21326

How To Protect Yourself From Jinn & Shaytaan With 2 Cds

MSRP:
Now: £16.95
Was:
How To Protect Yourself From Jinn & Shaytaan With 2 Cds 16B This book first confirms the existence of Jinn, aspects of their existence, and the effects of their activities, their lifestyle, for...
21297

MSRP:
Now: £5.95
Was:
The Explanation of the Chapters on Knowledge, Righteousness and Good Manners 23A Darussalam UK presents a collection of selected chapters from the classical collection of hadith Riyadh Al-Saaliheen...
21205