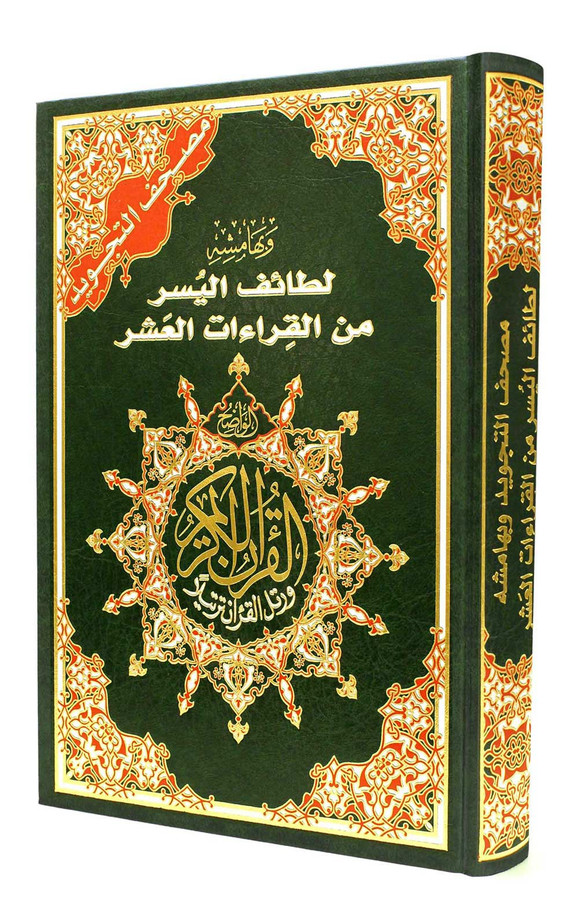 This copy of the Tajweed Quran facilitates the understanding of the differences of words’ intonation from a narration to another. Quranic Words that have different pronunciation in different narration are marked and pointed out in the Quranic context, and it is written in a way that makes it easier to be pronounced correctly as per the desired narration. Allaha (sw) ordered us in his holy book to recite the Quran with Tajweed ... "Quran recitation modulating". System of Tajweed serves as a guide for improving the recitation of Quranic style. It was in this way that the Qur'an revealed to Prophet Muhammad (peace be upon him), as well as the manner in which he recited it. Therefore, the readers of the Quran are eager to realize the promise of the Prophet Muhammad (pbuh): "whoever recites the Quran correctly and proficiently will be with the bountiful dutiful writers (the angels of the preserved tablet - Al lauh Al Mahfuz". Based on a practical understanding of phonology, we have color-coded some letters to facilitate the correct recitation of the holy Quran. This enabled us to classify these letters into three possible categories to enhance the reader's knowledge and remembering of Tajweed rules: - The letters which requires expanded vocalization. We used red color to highlight these letters. - The letters which are nasalized these letters are green in color. - The dark blue color indicates the emphasis of the letter (R), the blue color indicates the unrest letters-echoing sound- (qualquala) - While the letters which are written but are not vocalized. These letters are gray in color. The reader will get used to reciting the Quran by using colors very easily. By engaging the eye, the reader will find him/herself applying 24 rules of Tajweed with ease and precision while his/her mind is left un-enganged to comprehend and understand the meaning of the holy Quran. For more details click here All our Tajweed Quran products -including this Quran- come with the following: Color coded letters: to present the Tajweed rules, very good and simple way to learn and apply Tajweed rules. Obvious script: extra spaces were added between the words in order to make it easier to read and recite the Quran. Permissible stops: long spaces were added at certain places where it is permissible to stop. It helps to avoid stopping at wrong places or times. A set of very useful indexes such as: Surahs Color Index, Subject Index. Tajweed rules explained in details with helpful illustration
View AllClose

MSRP:
Now: $30.00
Was:
Illuminting The Darkness: The Virtues Of Blacks And Abyssinians 00000 Since the 1960s there has been a rapid and phenomenal increase of people in the West embracing Islām and the majority of those...
23966

MSRP:
Now: $30.00
Was:
Tajweed Quran With Facilitation of the Ten Readings 00000 This copy of the Tajweed Quran facilitates the understanding of the differences of words’ intonation from a narration to another...
23973

MSRP:
Now: $27.00
Was:
Methodical Interpretation Of The Noble Quran (Part-28) The Prophet tells us, "The best of you is the one who learns the Qur'an and teaches it." [Al-Bukhari] This is an excellent tool for anyone...
23604