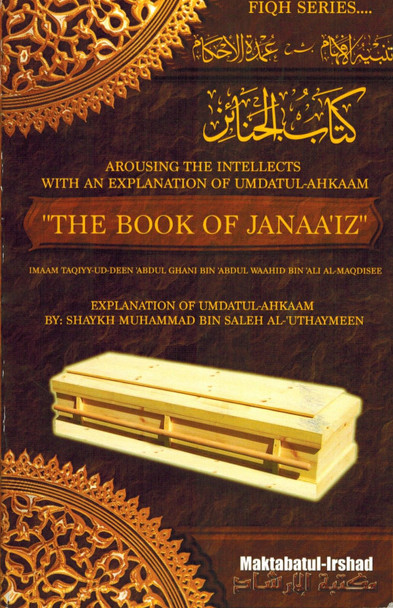 The book of Janaa’iz by Salih al-Uthaymeen Al-Janaa’iz is the plural of the janazah which is the deceased. It is said that janazah is the deceased and janazah is the stretcher. He is carried on, so the first is higher and the second is lower. What’s intended by the book of Al Janaa’iz is the book (Or chapter ) that has mentioned in the tailings concerning the dead.; From the washing of the body, the carrying of the body and the burying of the body, it is mentioned after the book of prayer because the prayer upon the body is important thing that is done with him and the most beneficial for him, so on the authority of the ibn Abbas (RADI ALLAHU ANHU) that he said: I heard the prophet peace be upon him say "there isn't a man Muslim, who dies and then forty peoples perform his Janazah without associating any partners with ALLAH, Except that he will be an intercession for them"
View AllClose

MSRP:
Now: £7.00
Was:
An Explanation Of The Six Principles “By the time Muḥammad ibn ‘Abd al-Wahhāb (d. 1206AH) had embarked upon his journey in rectifying the state of the Muslim Arabs, ignorance had very much...
23672

MSRP:
Now: £21.00
Was:
Abu Hurairah (May Allāh be pleased with him) reported, the Prophet (May Allāh elevate his rank & grant him peace) said, “A woman is married for four reasons: for her wealth, for her class,...
24751

MSRP:
Now: £14.95
Was:
The Book of Zakah and Fasting SL: 00000 Arousing the Intellects With an Explanation of Umdatul-Ahkaam (The Book Zakah and Fasting) Az-Zakah in the Shariah: An Obligatory portion of a...
21883

Essential Q & A Concerning the Foundations of Eemaan

MSRP:
Now: £7.50
Was:
11B Essential Questions and Answers Concerning the Foundations of Eemaan (Faith) & Obstacles in the Path of Eemaan By: Imaam 'Abdur-Rahmaan as-Sa'dee "The author of this book, Questions and...
21889

The Prayer Its Effects In Increasing Eemaan and Purifying The Soul

MSRP:
Now: £4.95
Was:
The Prayer Its Effects In Increasing Eemaan and Purifying The Soul 07B 'The people have indeed come to treat the Prayer as something unimportant. Attentiveness and humility in it have been taken...
21221