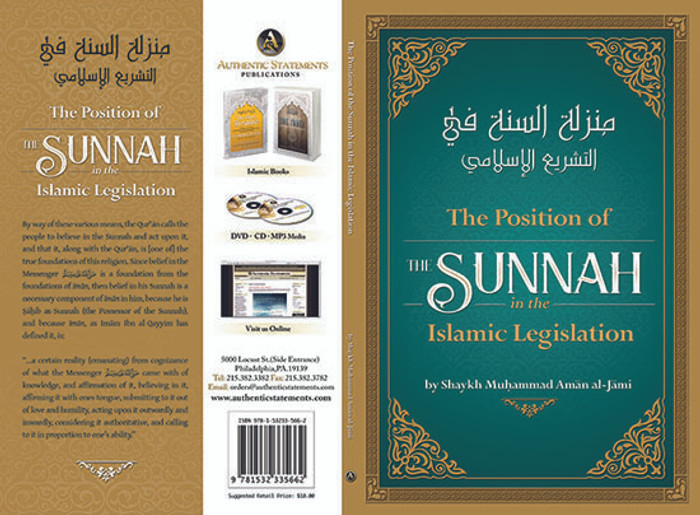 By way of these various means, the Qur'ān calls the people to believe in the Sunnah and act upon it, and that it, along with the Qur'ān, is [one of] the true foundations of this religion. Since belief in the Messenger ﷺ is a foundation from the foundations of īmān, then belief in his Sunnah is a necessary component of īmān in him, because he is Ṣāḥib as-Sunnah (the Possessor of the Sunnah), and because īmān, as Imām Ibn al-Qayyim has defined it, is: “…a certain reality (emanating) from cognizance of what the Messenger ﷺ came with of knowledge, and affirmation of it, believ­ing in it, affirming it with ones tongue, submitting to it out of love and humility, acting upon it outwardly and inwardly, considering it authoritative, and calling to it in proportion to one’s ability.”
View AllClose

MSRP:
Now: $37.35
Was:
The Jurisprudence of the Prophetic Biography The author goes through the seerah here and demonstrates the legal lessons that can be gleamed from the incomparable life of the Prophet. Dispelling...
23907

MSRP:
Now: $22.50
Was:
Taking Action: The Busy Entrepreneur's Guide To Mastering Time Management and Setting Smart Goals 00000 ‘Barakah Hassan’s unique approach brings clarity and purpose to every step of the...
23914

MSRP:
Now: $14.93
Was:
Divorce : Its history, legislation and modern reality 13B This book deals with a difficult but highly important topic. Divorce is more common today than at any previous time in recorded history...
21591

MSRP:
Now: $10.35
Was:
Football (Its Benefits And Ills According to The Divine Legislation) Football training is from the affairs of the permissible, as we do not know of any proof to prohibit it. The origin of a...
23339

The Legislation of Islaam

MSRP:
Now: $5.93
Was:
The Legislation of Islaam 11A It is hoped that if we implement these practices daily, doing so sincerely for the pleasure of Allah, we will have fulfilled the two conditions for the acceptability...
21500

MSRP:
Now: $22.43
Was:
Islamic Civilization: Its Foundational Beliefs and Principles In this book Mawdudi (1903 – 1979) attempts to bring out the vital relationship between the concept of civilization and Islam’s...
23749