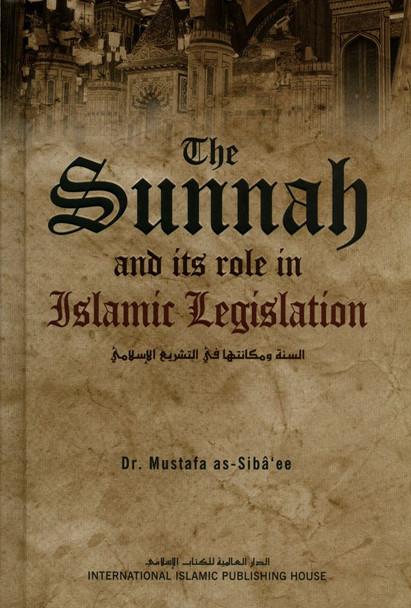 SL: 01DL1
The Sunnah and its Role in Islamic Legislation is a groundbreaking effort by Dr. Mustafa as-Siba’ee, for it has a completeness to it in two regards: first, the author manages to cover all topics related to the Sunnah—its status, its legislative force, the stages that led to its recording, just to mention a few—in a comprehensive and organized manner. Second, he presents the views of those that have attacked the Sunnah throughout history, detailing their arguments and then refuting them. Among those groups from the past were the Shi’aa and the Mu’tazilah; today, they are mainly the Orientalists and those that are influenced by them. Sheikh as-Siba’ee takes us through the historical development of the Sunnah, from the early stages of revelation to the recording of the Sunnah during the era of the great Imams of Hadith. Throughout that account, he highlights the contributions of the scholars in preserving the Sunnah and cleansing it from fabrications and lies. Shaykh as-Siba’ee gives a clear account of the revolutionary methods and scholarly principles that were established in order to authenticate historical reports and narrations. The author shows us that the fruits of that endeavour were the preservation of the authentic Sunnah and the birth of the Hadith sciences. This book has been a perennial source of knowledge for Arabic-speaking students of Islam, for its clarity, readability, and insightful research. New English-speaking students too have available to them this authoritative treatise on the Sunnah of our beloved Prophet Muhammad) may the peace and blessings of ALLAH be upon him).
View AllClose

MSRP:
Now: £9.95
Was:
Divorce : Its history, legislation and modern reality 13B This book deals with a difficult but highly important topic. Divorce is more common today than at any previous time in recorded history...
21591

MSRP:
Now: £6.90
Was:
Football (Its Benefits And Ills According to The Divine Legislation) Football training is from the affairs of the permissible, as we do not know of any proof to prohibit it. The origin of a...
23339

What Takes a Person Out of The Sunnah

MSRP:
Now: £2.50
Was:
Explaining Issues Of Hajj Umrah & Ziyarah(in Light Of The Quran & Sunnah) 04CL2 This book clarifies and explains many issues related to Hajj, Umarah and Ziyarah in light of the Book of...
23030

MSRP:
Now: £3.49
Was:
The Handbook for Muslim Teenagers Boys Edition by Professor K. Kabir Uddin 00000 You are a Boy, a pre-teenager or a full teenager, experiencing many changes in your body and mind. Sometimes you...
23072