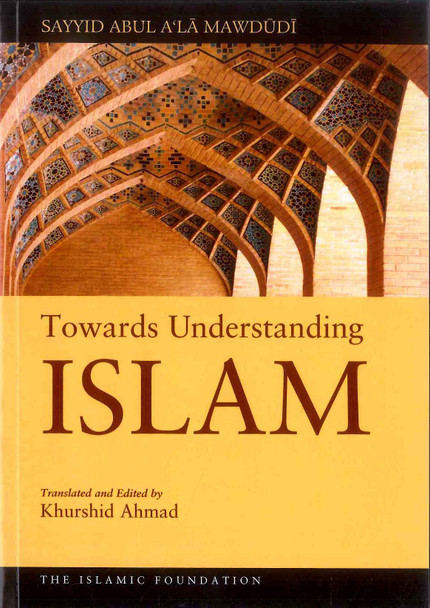 SL: 03CL2
A simple and comprehensive introduction to Islam. 'My purpose in writing this book has been to provide all those persons -Muslims non-Muslims-who have no access to the original sources of Islam with a brief treatise giving a lucid, comprehensive and all-embracing view of Islam. That is why I have avoided discussion over the minute details and have endeavoured to portray the entire picture of Islam in one perspective. Moreover, I have not confined myself to stating what we Muslims believe in and stand for, but have also tried to explain the rational bases of our beliefs. Similarly I have not only presented the Islamic modes of worship and the outlines of the Islamic way of life but have also tried to unveil the wisdom behind them. I hope this small treatise will go a long way to satisfy the intellectual cravings of the Muslim youth and will help the non-Muslims in understanding our real position.' (from the foreword by Mawdudi) 'Ours is an age of anxiety and restlessness. A change is imperceptibly overtaking the world. The old order is disintegrating; the new one is, however, yet to come. And history tells us that such ages of restlessness have also been periods of birth for new movements and cultures. The world is in the grip of a tension and awaits a twentieth-century renaissance of man. A significant feature of the present century is the new and wide-spread trend of Islam revival. After a long period of stagnation the world of Islam is rising from its stupor. A new awakening has appeared on the horizon; a new life is being infused into the community of Islam. This trend is visible in every country and at every place and has within it the possibilities of its becoming the harbinger of a new age' (from the Editor Preface) ---------------- About the Author Mawlana Mawdudi occupies a pivotal position in the movement for Islamic rebirth in the 20th century. He started his revolutionary mission at a time when the Western civilization was at the height of its intellectual and political power and when almost the entire Muslim world was in the grip of the western colonial rule. The demise of the Ottoman Caliphate had extinguished the last apparent hope of the Muslim Ummah. The clouds of gloom were cast upon the Muslim world. The horizon looked dark and dismal. It was in this background that a young scholar Mawdudi raised a clarion call for Islamic revival and reassertion. He invited the Muslims to the real source of their strength : The Qur'an and Sunnah of the Prophet Muhammad P.B.U.H. He awakened the Muslims to a new goal and mission to live and to die for Islam
View AllClose

MSRP:
Now: £12.00
Was:
Towards Understanding Our Religion Volume 1 11A Collected Writings from the Archives of Al-Basheer, the Magazine From the back cover: Al-Basheer was a magazine dedicated to Islamic sciences. It was...
21970

Towards Understanding the Quran Abridged Version of Tafhim al Quran

MSRP:
Now: £17.95
Was:
Towards Understanding the Quran Abridged Version of Tafhim al Quran 13A The Arabic with English translation of the Quran is accompanied with a selection of Sayyid Abul A’la Mawdudis commentary...
23139

MSRP:
Now: £13.95
Was:
Explanatory Notes On Imam An - Nawawees Forty Hadeeth 11B Subsequently, you have from the scholars those who have compiled forty Hadeeth concerning the fundamentals of the religion; others...
21455