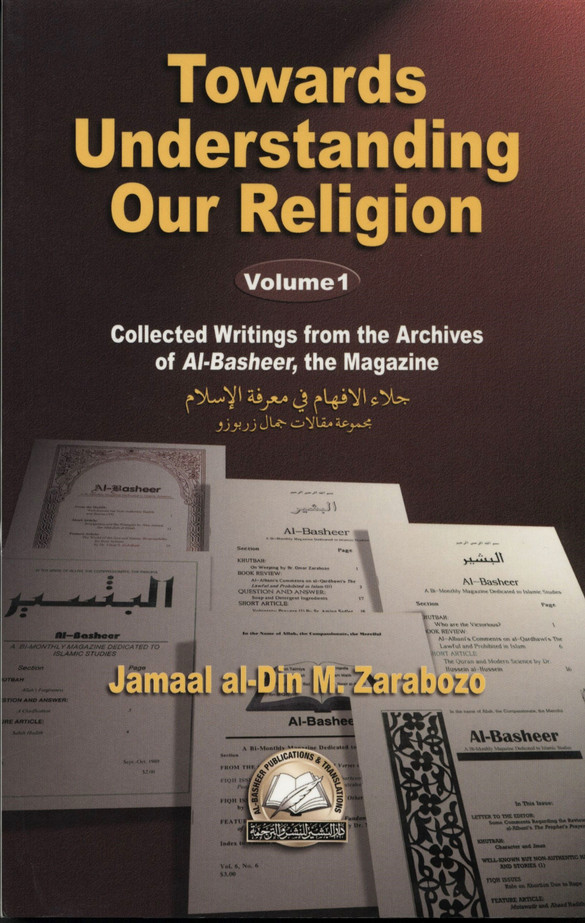 Collected Writings from the Archives of Al-Basheer, the Magazine From the back cover: Al-Basheer was a magazine dedicated to Islamic sciences. It was published from 1987 to 1995. During that time, it developed a small but very loyal following. Since it stopped being produced, there have been numerous requests for reprints of the old issues. Another and better suggestion was decided upon: reprinting of the original articles in book form. This is the first volume of such a proposed series. This particular volume contains a number of articles from the editor of al-Basheer, Jaal al-Din Zarabozo. The articles contained in this volume come from the first two years of al-Basheer. Among the numerous articles contained herein are: - Allah's Description of the Hypocrites, Between Islam and Kufr, Islam and Innovations. - The Meaning of Bidah. - There is no Compulsion in the Religion. - Daily Congregational Prayers and Combining the Prayers./ - Zakaat and Jewelry. - Preserver of the Sunnah. - The Importance of Jihad in the Life of a Muslim. - The Importance of the Sunnah and Hadith in Islam. These articles have been in great demand and it is hoped that their publication in book form will ease access to them on a large scale.
View AllClose

MSRP:
Now: £6.95
Was:
Islam The Misunderstood Religion 03A The Majority of the modern " Educated " people are today faced a religious crisis. Is religion really a fact of life ? it might have been one in the Past,but...
21199

MSRP:
Now: £5.49
Was:
Description Pure Egyptian Blackseed   ‘There is a healing in black seed for every disease except death’
22546

MSRP:
Now: £4.50
Was:
Black Seed Sweetsfor coughs, sore throats & immune system support ‘There is a healing in black seed for every disease except death’ Prophet Muhammad
22547

MSRP:
Now: £5.95
Was:
Towards Understanding Islam SL: 03CL2 A simple and comprehensive introduction to Islam. 'My purpose in writing this book has been to provide all those persons -Muslims non-Muslims-who have no...
21371

The Men of Madina volume 1

MSRP:
Now: £10.00
Was:
The Men of Madina volume 1 20B This is a translation of volume seven of Ibn Sa’d’s Kitab at-Tabaqat al-Kabir. The Tabaqat is a great store of information which gives the reader a vivid...
22137