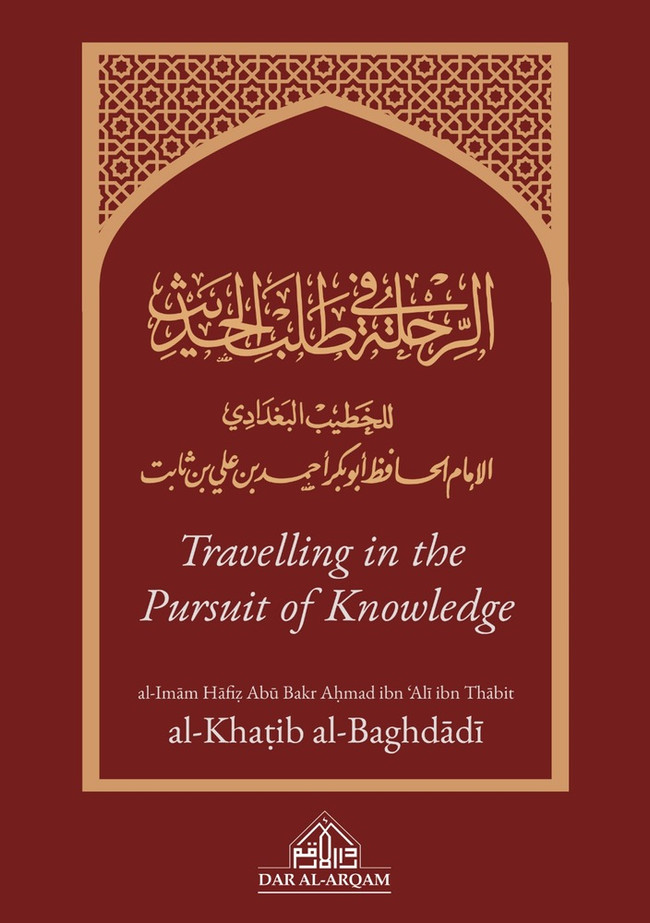 Before you is the English translation of the classical treatise al-Rihla fi Talab al-Hadeeth by the great scholar of the Shafi’i school of jurisprudence and the imam of his time, Khateeb al-Baghdadi. His complete biography from Imam al-Dhahabi’s voluminous work Siyaar A’laam al-Nubala has also been translated and added herein. This treatise is essentially a gathering of powerful and insightful narrations (of the Companions, pious predecessors, and the Prophet Musa) that emphasise the importance of travelling and exerting efforts towards seeking knowledge. It also serves as a historical record, highlighting the efforts of the early generations of scholars without whom the knowledge would not have been collected. These narrations also serve as a reminder of the high aspirations and humility required by Muslims in the pursuit of knowledge, a wakeup call to tread the path of our pious predecessors. Imam al-Dhahabi said regarding al-Khateeb, He produced a great amount of literature and was advanced in his works to the extent that he overshadowed his peers… He eventually became indisputably the most learned person of his time. Abu ‘Alī al-Baradani said, The hafiz of our time, Abu Bakr al-Khateeb narrated to us. I have never seen the like of him, nor do I think he witnessed anyone similar to him. was born.
View AllClose

A Summary of the Creed of As-Salaf As-Saalih

MSRP:
Now: £1.50
Was:
A Summary of the Creed of As-Salaf As-Saalih 04CL1 A creed is a set of fundamental beliefs and guiding principles of a religion. A religion or sect differs from another if its beliefs and...
23262

Al-Wajibat (The Success Granted by the Oft-Forgiving Lord)

MSRP:
Now: £12.50
Was:
Al-Wajibat (The Success Granted by the Oft-Forgiving Lord) 11A Shaykh al-Islam Muhammad b. 'Abdul Wahhab (rahimahullah) clarifies in this compilation a number of the essential beliefs and...
23307

MSRP:
Now: £2.50
Was:
An Important Warning Against Ribaa This is a short rebuttal of a research written by Dr. Ibraahim bin Abdullah AnNaasir, in which he tried his best to show the permissibility of most types of...
23310

Glimpses of the Lives of Righteous People

MSRP:
Now: £5.00
Was:
Glimpses of the Lives of Righteous People This book discusses the teachings of Islam. They have been presented through the glimpses of the lives of the righteous people of the earlier...
23320