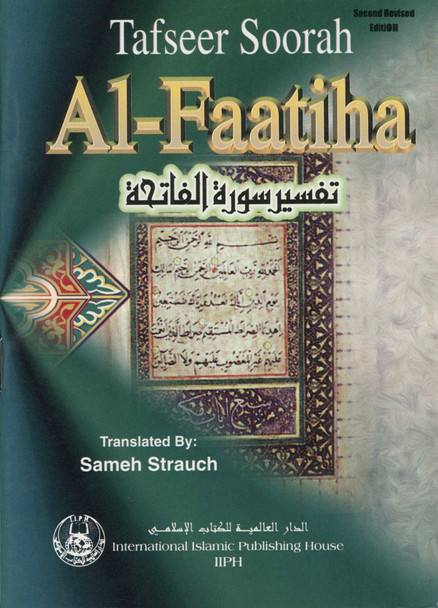 SL: 01CL1
Whenever a Muslim performs his daily prayers, he has to begin every Raka by reciting Soorah al-Fatiha. But some of us may be ignorant of the essence of this surah with which the Holy Qur'an opens, thought it was not revealed first. In this book Sameh Strauch explains that essence, producing stories of Fatiha's cure effect, the other names given to it and disagreement among Muslim scholars on whether "Bismillah" is a part of that soorah.
View AllClose

MSRP:
Now: £13.95
Was:
The Fundamentals of Tafseer & Tafseer of Soorahs: al-Faatihah, al-Ikhlaas, al-Falaq and an-Naas 11B Certainly, within every science it is important for a person to learn its fundamentals, so they...
21453

MSRP:
Now: £45.00
Was:
Tafseer Al-Jalalayn SL: 00000 The publication of this book is a landmark in the history of Islamic Literature in English. Wiht this work, for the first time, a complete translation of one of the...
21603

MSRP:
Now: £7.95
Was:
Tafseer Sooratin-Naba / تفسیرسورۃ النباء SL: 07 This is the first book in a series presenting extracts from the dependable Tafseers, beginning with Tafseer (explanation) of the Soorahs of the...
21422

MSRP:
Now: £3.95
Was:
Tafsir Surah Al Buruj 07B The Quran consists of many lessons and parables for people to obtain lessons and draw strength from. Surah Buruj contains one of the most beautiful stories of...
21224

MSRP:
Now: £5.95
Was:
Tafsir Surah Al - Mulk 07B The beauty of the Qur'an is such that its miracles cannot truly be understood until one contemplates every verse of every surah; this alone makes tafsir one of the most...
21225

MSRP:
Now: £35.00
Was:
Tafsir al Qurtubi : Classical Commentary of the Holy Qur'an SL: 014 The publication of this volume represents a significant landmark in the history of Islamic literature in English. There has...
21568