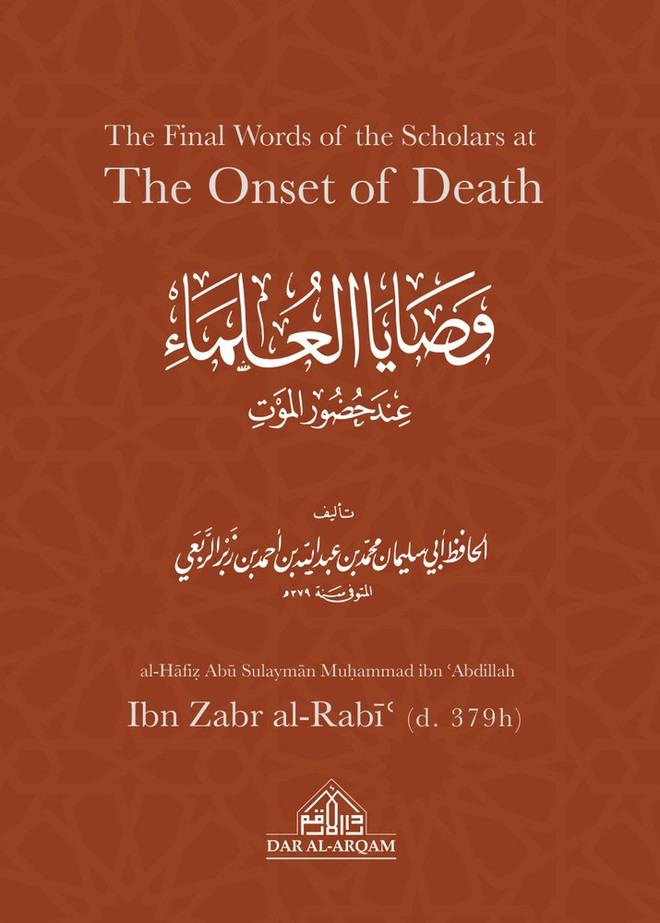 The author al-Ḥāfiẓ ibn Zabr has collected in this work a moving selection of narrations regarding the final moments of the Prophets, Companions and the scholars from amongst the early generations. Provided through this are their final testaments, words of wisdom and reflections at the coming of death. Al-Dhahabī said in Tadhkirat al-Ḥuffāẓ: “[He was] the erudite hāfiẓ and author Abū Sulaymān, the muḥaddith of Damascus and the son of its judge. Ibn Zabr said, ‘Abū Jaʿfar al-Ṭaḥāwī reviewed some of the work I authored, and he became impressed. He said to me, ‘O Abū Sulaymān, those of your ilk (i.e. the ḥadīth scholars) are the chemists and those of our ilk (i.e. the fiqh scholars) are the doctors.’’” Al-Kattānī said: “Many narrated from him and he dictated in the Jāmiʿ Masjid. He was a thiqah narrator, noble and dependable. He authored a book entitled al-Wafiyāt which was famous on the tongues. Abū Naṣr ibn al-Jabbān related that Ibn Zabr told him that he saw Allah, the Exalted, during his sleep and he mentioned that he saw just a light.” Abd al-Ḥay ibn al-ʿAmād al-Ḥanbalī said in Shadharāt al-Dhahab: “The deaths of 379h: From them was Abū Sulaymān ibn Zabr, he was a muḥaddith, a ḥāfiẓ, a thiqah narrator and a highly revered individual. He authored a number of beneficial works.
View AllClose

MSRP:
Now: £8.45
Was:
Gateway To Arabic Verb Conjugation Flashcards (Set Three) This pack of flashcards contains 45 double-sided cards in full colour, each measuring 210 by 140 mm. The pack has been designed to help...
23731

MSRP:
Now: £8.95
Was:
Nurturing Eeman in Children 03B A plethora of parenting books on the market these days covers every aspect of dealing with your children. From the terrible twos to the troublesome teens, you will...
23733

MSRP:
Now: £6.50
Was:
Mohammad's Prophethood Reality or Myth (Hard Cover) 03A No other personality in history has generated more debate than that of the Prophet of Islam Muhammad! He has been ranked the number one...
23735

MSRP:
Now: £9.50
Was:
Prophet Muhammad The Teacher Education is one of the most universally discussed topic, the process of exchanging knowledge and values from one generation to the next. For Muslims, wherever they may...
23674