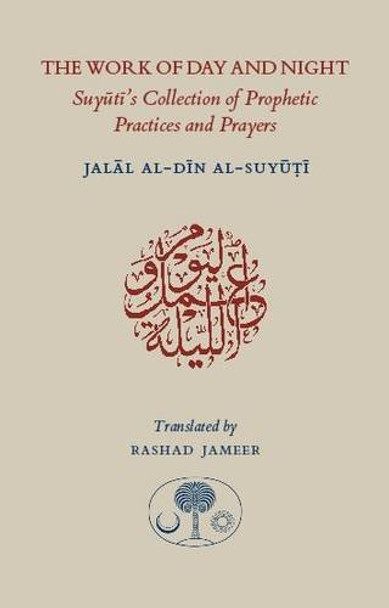 Imam Jalal al-Din al-Suyuti composed the Work of Day and Night (‘Amal al-yawm wa’l-layla) as a guide to correct conduct and worship in accordance with the example of the Prophet and the Pious Predecessors. This book contains some of the most beautiful prayers in Islamic devotional literature, and Suyuty has provided guidance about nearly every situation that one is likely to encounter day-to-day. In it the reader will find: the prayers said upon awakening, before eating and when dressing; the acts carried out at various times of the day and between prayers; and much else. A special section is dedicated to prayers that are recommended for reading at times of need due to their widely recognised protective qualities. Work of Day and Night is invaluable for learning the Sunna of the Prophet and integrating it into one’s life, as Suyuti took great care to explain precisely how to perform each of the daily practices in accordance with the example of the Prophet Muḥammad. It is hoped that this bilingual volume will enable a wider English-speaking audience to access one of the treasures of traditional Islamic knowledge and practice, and that it will provide Muslim readers with a source of inspiration in everyday life. A selection of the most beautiful and useful prayers has been transliterated and included in an appendix so that all worshippers may benefit by reciting them — regardless of Arabic ability. There is also a glossary of the most important religious terms. Imam Jalal al-Din Suyuti (d. 911/1505) was one of the most prolific writers produced by the Islamic world. He is the author of over 700 works in virtually every field known to Islamic science, including the famous Jalalayn commentary of the Qur’an (of which he was co-author). Rashad Jameer studied Arabic, Qur’ān, Hadith, Hanafi and Maliki fiqh and ‘aqida in Canada, Egypt and Yemen. He is the translator of several classical texts on Hadith, and also teaches Islamic Studies at a number of mosques in Toronto, Canada.
View AllClose

MSRP:
Now: $6.00
Was:
The Biography Of Imam Ahmad bin Hanbal 05DL3 Imam Ahmad ibn Hanbal is remembered for many things. He was an Imam in Fiqh, Hadith, and many other sciences. In fact, his madh-hab is one of the four...
22930

MSRP:
Now: $9.00
Was:
The Biography Of Imam saeed bin Al Musayyab 05DL3 This book is a biography of the chief of At-Tabiieen and the leader of the Muslims in his time Imam Saeed bin Al-Musayyab - may Allah have abundant...
22963

MSRP:
Now: $22.49
Was:
Epistle on Worship (Risālat al-ʿubūdiyya) Ibn Taymiyya remains one of the most controversial Islamic thinkers today because of his supposed influence on many fundamentalist movements. The common...
23475

MSRP:
Now: $9.00
Was:
A Guide to Salah (Prayer) This book is the result of direct research into the Sunnah of Prophet Muhammad saw and makes numerous references to the original sources. It contains all the essential...
23548

MSRP:
Now: $3.00
Was:
The Prayer & Purification 04CL1 In this treatise the correct procedures of prayer (Salaah) are clarified for the new Muslim. The main objective of this work is to explain the steps of...
23210