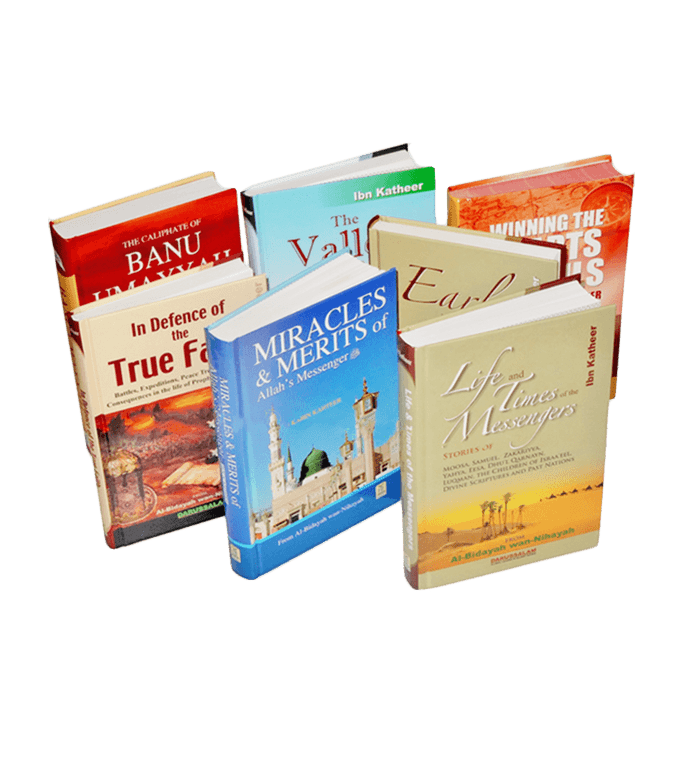 In this book, The Stories of the Prophets have been compiled from 'Al-Bidayah wan-Nihayah' (The Beginning and the End) and all the events in their lives have been supported by the Qur'anic Verses and the Sunnah (traditions) of the Prophet (S). This volume Winning the heart and Soul contains an account of the some of the most important expeditions and delegations that occurred in the lifetime and under the leadership of the Messenger of ALLAH. Life and Time of Messengers. The exact number of prophets and messengers sent by ALLAH is not known, but the Qur'an makes clear that all of the prophets were sent to various nations to preach Islamic monotheism. This volume In Defence of True Faith contains a detailed account of the most momentous events from the Battle of Badr to the Battle of Mu'tah -that occurred to the Muslims under the leadership of the Messenger of Allah. The book Early Days starts by describing the beginning of creation- from the throne and the Kursi, the universe and all that is in it, such as the angels, the jinn and humans. This volume Valley Came Alive contains a detail account of the life and times of the Messenger of ALLAH taken from a number of historical and traditional sources. This Book Miracles and Merits of Allah’s Messengers focus on the events that took place after the death of the messenger of Allah, such as the choosing of Abu Bakar رضی الله عنه as the Caliph, the ghusl of the prophet صلّی الله علیهِ وآلهِ وسلم and his burial. In this volume The Book of the End we have presented from them the signs of the Hour and the events that are yet to take place, although mentioning very few examples of those prophesies that have already been realized. The Umayyad Caliphate (c. 661-750 CE/41-132 AH) was the second of the four major Islamic caliphates established after the death of Rasulallah. Although the Umayyad family originally came from the city of Makkah, their capital was Damascus. At its greatest extent, it covered more than five million square miles (13,000,000 km2), making it one of the largest empires the world had yet seen, and the seventh largest contiguous empire ever to exist.
View AllClose

When the Moon Split : Large

MSRP:
Now: €17.77
Was:
When the Moon Split : Large 26B About this book: The biography of the Prophet صلی الله علیه وآلهِ وسلم is a very noble and exalted subject by which Muslims learn about the rise of Islam, and...
21550

MSRP:
Now: €148.10
Was:
Sahih Al-Bukhari (9 Vol. Set) 21B Generally regarded as the single most authentic collection of Ahadith, Sahih Al-Bukhari covers almost all aspects of life in providing proper guidance from the...
22103

MSRP:
Now: €2.96
Was:
Khalid bin Al Waleed (The Sword of Allah)The Golden Series of the Prophet's Companions 04CL2 Khalid bin Al-Waleed (R) was the hero of Islam. He led several battles and was always victorious. He...
23006

MSRP:
Now: €2.96
Was:
In Quest of Truth(Salman Al Farisi)The Golden Series of the Prophet's Companions 04CL2 From the worship of fire in Persia, to Christianity in Syria, to the guiding light of Islam in the dessert...
23007

MSRP:
Now: €4.15
Was:
Muslim Scientists A forgotten historical past or shall we say a hidden past, a muslim today should be look at our ancesters for inspiration and not elsewhere
23724

MSRP:
Now: €5.92
Was:
Existence The Islamic understanding of the existence has its roots in the Qur’an, the very word of Allah (God) and the central reference of Islam. The Qur’an has always influenced and still...
23727

MSRP:
Now: €2.96
Was:
Khalid bin Al Waleed (The Sword of Allah)The Golden Series of the Prophet's Companions 04CL2 Khalid bin Al-Waleed (R) was the hero of Islam. He led several battles and was always victorious. He...
23006