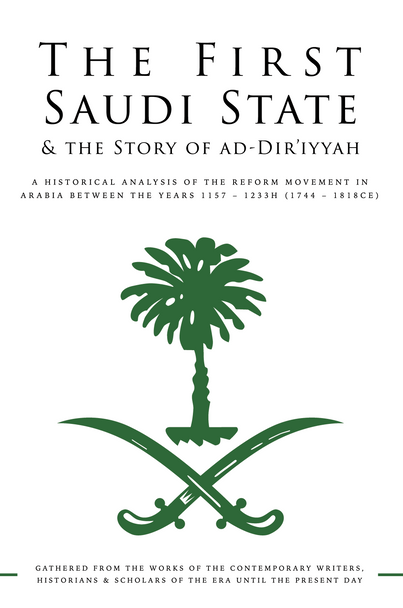 During the mid eighteenth century in the centre of the Arabian Peninsula an eminent scholar faced his final expulsion from yet another town after its Amīr feared reprisal from hostile rulers for having granted him a haven to call to Tawhīd. Virtually alone and not conceding to despair; he travelled by foot in the mid-day Arabian heat; Shaikh Muḥammad bin ‘Abdil-Wahhāb chose his ultimate destination – wisely. The remarkable events that followed and the aid and victory his call achieved laid the foundations for what would become known as the First Saudi State. The Shaikh; along with the people of his chosen destination were destined for extraordinary achievements, and dominance in ascendancy and governance that had been unparalleled for centuries. Such were the allies he was ordained to have stand by his side; and such were the extraordinary episodes that were to follow and such was the facilitation their call was granted in the face of overwhelming odds, formidable enemies and bitterly antagonistic confederacies – that it leaves no doubt for the one who observes as to the true nature of their call and message. The legacy and cause of success is encapsulated in the words of the former Muftī of Saudi Arabia, Shaikh ʽAbdul-ʽAzīz bin Bāz, who said: “Some of the historians of this daʽwah have stated; that the Islamic history subsequent to the era of Prophethood and Rightly Guided Caliphates has not witnessed a complete observance of the Islamic rulings – as has been witnessed by the Arabian Peninsula under the shade of the Saudi State which has aided this daʽwah and has defended it.”
View AllClose

MSRP:
Now: £14.99
Was:
Rabbana: Supplications from Qura’n (Book & CD) 0000 Rabbana is an essential Qurʾān-based resource for the supplicant. Prayer is at the heart of all true worship. In these Qurʾānic verses we can...
23226

MSRP:
Now: £25.00
Was:
The Qur'an English translation with parallel Arabic text 11B The Qur'an, believed by Muslims to be the word of God, was revealed to the Prophet Muhammad 1400 years ago. Recognized as the greatest...
23229

Tawbah:Turning To Allah In Repentance

MSRP:
Now: £5.00
Was:
Tawbah:Turning To Allah In Repentance Every human is susceptible to make mistake. The Qur’an gives them hope and teaches them to ask Allah to take care of them and guide them to the right path...
23334

The Divine Reality: God,Islam and the Mirage of Atheism

MSRP:
Now: £17.00
Was:
The Divine Reality: God,Islam and the Mirage of Atheism In The Divine Reality, Hamza Andreas Tzortzis provides a compelling case for the rational and spiritual foundations of Islam, whilst...
23552

Reasons for Deviation from the Truth

MSRP:
Now: £3.95
Was:
Reasons for Deviation from the Truth "From the most important things that I advise myself with and my brothers is to be firm upon the truth, to have sincerity in this to Allah, the Most High,...
23544