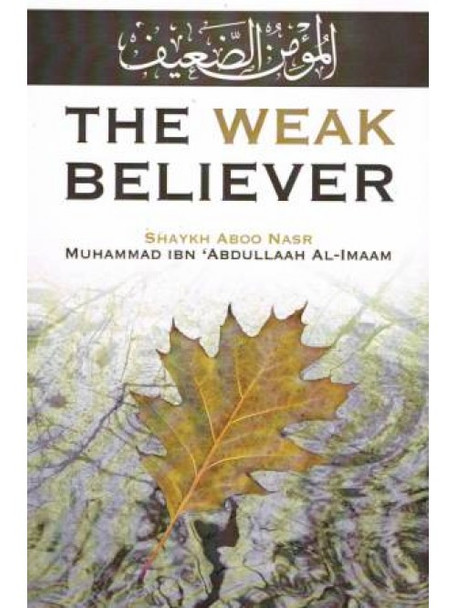 Within this book, Shaykh Muhammad Bin 'Abdullaah Al-Imaam, compiles a series of various weaknesses of the believer with commentary from scholars of Ahul-Sunnah. A very beneficial book!! A must have book for any Muslim battling with their weaknesses. From the book: A Believer's Weakness Is Of Two Types: Religious And Worldly Weakness is usually religious and intangible or worldly and tangible. Some believers have weaknesses of both types. Those with religious weakness are either poor and wicked or rich and wicked. Those with worldly weakness are either poor and righteous or poor and wicked. Those with both weaknesses are poor and wicked. Harithah ibn Wahb (may Allah be pleased with him) narrated, "Allah's Messenger (peace be upon him) said, 'Shall I not inform you about the residents of Paradise? (They are) every weak person whom people regard as lowly, but if he were to swear an oath on Allah, He (Allah) would fulfill it. Shall I not inform you about the residents of Hell? Every cruel, mean and arrogant person.'"[1] Al-Hafidh pointed out, "The weak here refers to the individual who is physically weak due to his humbleness and his overall state of weakness in this world. However, the one who is deemed (truly) weak is the person who is seen as low due to his unproductiveness in this life (dunya)." [2] I (the author) say, this hadith refers to the praised tangible and intangible weaknesses. Hence, weakness in religion is praised when interpreted as humbleness. Likewise, physical weakness is praised if associated with strong iman. The weakness of the poor is described as lack of worldly tools of amusement (e.g. wealth, power, etc.). However, they are worthy of praise if their worldly weakness is associated with patience and righteousness. Their worldly weakness will not harm them (in the hereafter). [1]- Recorded by Imam Al-Bukhari: 4918 and Imam Muslim: 2853. [2]- Al-Fath: 8/846
View AllClose