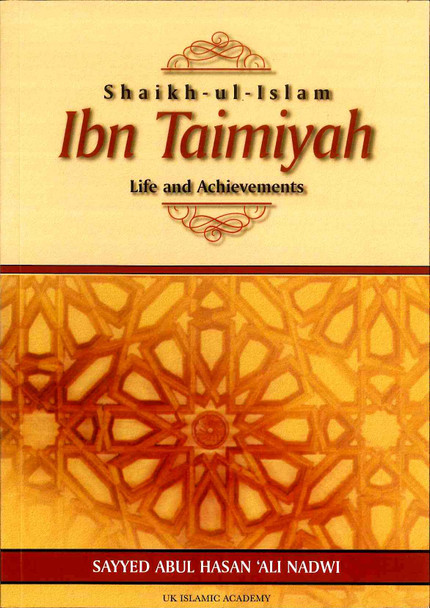 In Ibn Taimiyah (661-728 A.H.) we see a devout doctor of religion versed in all categories of philosophy and dialectics, a man of vast learning acquainted with the original Scriptures of many religions and their subsequent amendments and accretions, not least Christianity and Judaism as also with the heretical and mystical teachings of sects which claimed to belong to the fold of Islam. Here was a man who had learned the lesson of unalloyed Tawhid directly from the Qur'an and the Sunnah and was capable of rejecting all those practices which ran counter to the true concept of the Oneness of God. A theologian, a Traditionist and legist combined, he was adept when it came to the Arabic language and the secular sciences. With an eidetic memory, he could argue across a vast range of subject matter, embarrassing his adversaries with his huge storehouse of learning. In this short but succinct volume, more than a cursory glimpse of the full range of Ibn Taimiyah's achievements are documented, Blended with a colourful and insightful biography, from his early childhood to his death 67 years later in prison, Sayyed Abul Hasan 'Ali Nadwi's account of Shaikh-ul-Islam Ibn Taimiyah leaves one thirsting for more.
View AllClose

MSRP:
Now: £20.00
Was:
Explanation of the Concise Advices of Shaykh-ul-Islam Ibn Taymiyyah Abul-Qāsim as-Sabtī—the scholar and world explorer—regarded a then 36-year-old Ibn Taymiyyah to be the most knowledgeable...
23807